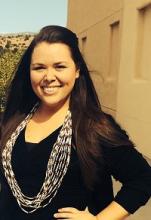 Cheyenne Sanders (B.A., American Indian Studies and Political Science, 2011) is currently Associate General Counsel for the Yurok Tribe, where she is also a member. Cheyenne earned her JD from Cornell Law School in May 2014. Cheyenne was a recipient of the McCormack Scholarship at Cornell Law, a generous merit based scholarship awarded, in part, on her AIS studies including her senior thesis "Tribal Consultation in the 21st Century." While at Cornell, Cheyenne interned with the Office of the Solicitor General at the National Science Foundation, a private law firm, and with the Native American Unit at the Northwest Justice Project in Seattle. As Associate General Counsel, Cheyenne's work includes drafting land purchase agreements, intergovernmental agreements and legal briefs on a variety of topics. She is also a tribal prosecutor in Yurok Tribal Court proceedings. In her spare time, Cheyenne is involved with her local chapter of WEWIN (Women Empowering Women for Indian Nations) and is a newly elected Board Member for the California Indian Law Association (along with fellow AIS alum, Anna Hohag).