Study Abroad: Indigenous Sámi Culture and Connection to the Land in Arctic Europe

The Department of American Indian Studies, in partnership with Comparative History of Ideas, is offering a study abroad program this summer.

Indigenous Sámi Culture and Connection to the Land in Arctic Europe 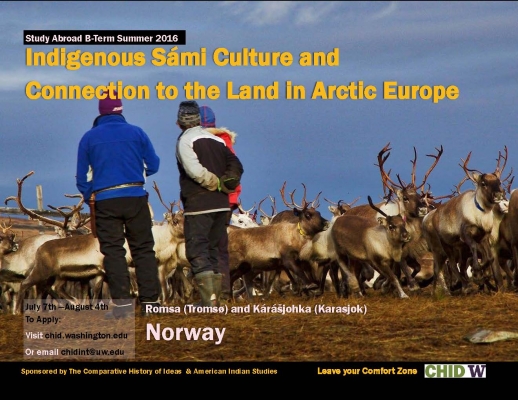 One of the important tools used to colonize the Indigenous Sámi people has been the ordering of knowledge traditionally enshrined in the university. This Eurocentric way of knowing tends to value the abstract over the specific and the individual over the collective, dividing knowledge into separate disciplines and often treating the objects of knowledge as devoid of agency or inherent worth. Not only has this way of knowing opened Sápmi (or Sámi Land) to the controlling, knowing gaze of the colonizer, it has also overwritten and sometimes silenced the place-based intellectual and philosophical traditions of the Sámi, turning their beloved Sámi Eadnan (Sámi Mother Earth) into commodifiable “natural resources” while positioning Sámi knowledge as quaint, unreliable, and outdated, and establishing the outside scientists and scholars as the reliable experts who are authorized to speak the truth about the Sámi and their land.

In the face of this powerful colonial onslaught, though, traditional Sámi ways of knowing and ways of relating to place have continued, adapting to the new contexts in ways that have allowed Sámi culture to both survive and, in places, thrive. This cultural resilience is a testament to the strength of the Sámi’s place-based ways of knowing and being. This program will bring students to the Norwegian side of Sápmi in order to study and encounter Sámi place-based culture and ways of knowing, and some of the complex ways in which these have interacted with majority, colonial culture and institutions. We will travel to the small coastal community of Gáivuotna/Kåfjord, where we will attend the annual Sámi-hosted Indigenous music and cultural festival Riddu Riđđu. In addition to experiencing a variety of yoik and other cultural performances, students will also have ample opportunity to interact with Sámi attendees and performers, and to see how the Sámi situate their own artistic traditions within a larger global Indigenous context.

*Note that the fees stated above do not include some additional costs, including, but not limited to: airfare, Study Abroad Insurance ($2/day), and personal spending money. Remember that these costs will differ by program. Be sure to read our Fees, Financing, and Withdrawal information for details about the fee structure and payment schedule.