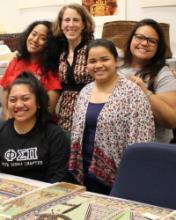 Professor Holly Barker with several of her students

The Center for American Indian and Indigenous Studies (CAIIS), the Department Of American Indian Studies and the Bill Holm Center for the Study of Northwest Native Art at the University of Washington condemn the demeaning attacks in the media and the harassment directed at Dr. Holly Barker in response to her recent publication, “Unsettling SpongeBob and the Legacies of Violence on Bikini Bottom.” This article is an important piece of scholarship that addresses the impact of media representations, especially children’s cartoons, on systems of inequality. Dr. Barker's scholarship asks us to consider how the public's association of Bikini Bottom as the home of SpongeBob impacts the Marshallese people whose histories and stories are erased from their ancestral homelands. The Bikinian people cannot reside on Bikini Atoll today because of residual radiation levels from the U.S. Government's testing of 23 nuclear weapons on the islands. While cartoons may seem harmless entertainment, extensive research has demonstrated the ways in which these representations shape policy and influence how people understand and engage with each other.

Dr. Barker’s work with the Marshallese communities impacted by US nuclear testing reminds us of the significant human costs of this program and of the current efforts by Marshallese to recover and teach others about their struggles. The issues facing the Marshallese people are extreme, which makes the backlash to Dr. Barker’s scholarship all the more unacceptable. As Alson Kelen (Bikinian) says about the recent negative media attention Dr. Barker‘s research has attracted, "They are upset about a cartoon character they grew up with, we are upset about a life we lost." It is voices like Kelen’s that are too often ignored.

Dr. Barker’s research is the result of the long-term relationships she has built with the Marshallese people, beginning in 1988 when she became a Peace Corps Volunteer on Nallo, Mili. Dr. Barker went on to serve as executive assistant to the RMI ambassador to the U.S. in Washington, DC from 1990-2005. In 2018, she was appointed by Her Excellency Dr. Hilda Heine, President of the Marshall Islands, to serve as the only non-Marshallese Commissioner to the Republic of the Marshall Islands' National Nuclear Commission. This commission is tasked with pursuing nuclear justice on behalf of the Marshallese people. Dr. Barker is also the author of two books detailing the effects of U.S. nuclear weapons testing from a Marshallese perspective. Her scholarship is both historically and personally informed by her long-standing relationships in the community and her research conducted in the Marshallese language.

The abusive and harassing response to Dr. Barker's article, including extensive efforts to discredit her, should be of concern to every scholar and student in Indigenous Studies and to the institutions that support us. By its very nature, scholarship in Indigenous Studies challenges the status quo, and can too easily lead to misunderstanding, indignation and, as in this case, unmasked vitriol. Our goal as scholars is to create dialog and debate, something that this kind of willful misrepresentation and hateful doxxing quickly shuts down. We call for more thoughtful engagements with Dr. Barker’ work. We stand with Dr. Barker and with future scholars wanting to publish about topics related to the everyday concerns of the communities we serve.

Bill Holm Center for the Study of Northwest Native Art