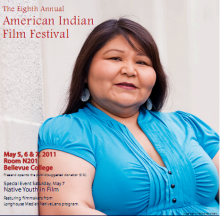 On May 5th, 6th, and 7th, 2011,  the Eighth Annual Presentation of the American Indian Film Festival will be held at Bellevue College.

Steffany Suttle, a graduate of our Native Voices program, will show three films at the festival.

Awakening of the Spirit

AWAKENING OF THE SPIRIT is a portrait of Master Carver Robert Peele (Tsimshian-Haida).  Peele is now known by the traditional name that was given to him, Saaduuts.  He has devoted years to teaching the youth of the  Seattle, WA area, Native and non-Native, the traditional way of carving a canoe.  As a boarding school survivor he has overcome many challenges over the years.  Saaduuts now looks forward to the future, enjoys spending time with his grandchildren, and passing down the traditional ways of carving ensuring that it will live on for many years.

STRONG HEARTS is an examination of violence against Native American women in major motion pictures, independent film, video games and television mini-series.  The violence against Native American women is so common in mass media that it’s become “normalized.”  The violence depicted is rooted in a brutal historical record dating from first contact and continues today.