What is Idle No More? 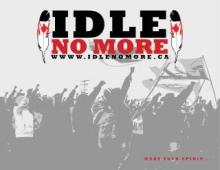 Here is a quick rundown of what the Idle No More Movement:

Who?  The movement is supporting First Nations people of Canada.

What?  A grassroots movement to get people mobile to join in the fight for honoring ancestry treaty rights, in protest of the new legislation policies that were passed in Canada last year. Some of the federal law changes include: Fisheries Act, the Canada Grain Act, the holding of hazardous materials, and making changes to Navigable Waters Protections Act.

Where? Canada; but demonstrations have gone international!

When?  The Conservative party of Canada ruled for policy changes in December of 2012.

Why?  There is extreme controversy over the proposed changes because of the resistance to the mining, oil and gas projects, and a pipeline project, ultimately threatening land and water qualities.

What is being done?  Various demonstrations including: hunger-strikes, flash mobs, hand drum songs, teach-ins, wearing regalia to shopping centers, gatherings in protest all over the World!

Misha Averill is a senior at the University of Washington, majoring in American Indian Studies with a minor in Diversity. Her future aspirations include helping Native American communities through preservation of traditions, culture, language, and human rights. Misha has a special interest in Indigenous Rights and cross-culture interactions, and she hopes to attend law school for tribal government and Indian law.