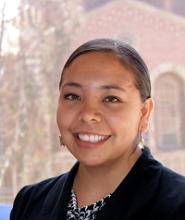 Since graduating from the Native Voices program in 2011, Clementine Bordeaux (Sicangu Oglala Lakota) started a new position as Academic Coordinator for the American Indian Studies Interdepartmental Program at the University of California, Los Angeles (UCLA). At UCLA she advises undergraduate and graduate students in the program in addition to working closely with faculty and staff to support the Native community on campus. In 2015 the Native staff, including Clementine, will form the first Native American Staff Association of UCLA to aid in professional development. She recently became active in the American Indian Counselor and Recruiters Association (University of California and California State University) and supports multiple outreach efforts for Native students on top of her regular recruitment efforts. In October of 2012 Clementine travelled to Rome with a large assembly of Native peoples to attend the canonization of Kateri Tekakwitha into a saint and upon returning from Rome, Clementine worked on several short films and workshops regarding Saint Kateri Tekakwitha, Kateri Circles and the National Tekakwitha Conference and taught the first ever “Native American Saint Kateri Tekakwitha” course in American Indian Studies at UCLA. She volunteers regularly for the American Indian Community Council (AICC) of Los Angeles, a nonprofit that works with the urban Native community. Last spring, 2014, Clementine ran her first half marathon under AICC which was an official charity of the Los Angeles Marathon and will be running the charity relay again in March 2015. This past fall 2014, Clementine was recognized as a “Native American 40 Under 40” by the National Center for American Indian Enterprise Development at the Indian Progress in Business Awards Gala.