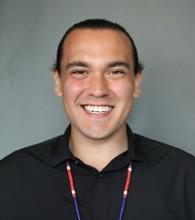 Joe Dupris is a student in the Joint PhD program in Anthropology & Linguistics (ANLI) at the University of Arizona starting in the Fall of 2015.

Joe arrived in Tucson in 2014 and is a Master’s of Arts Candidate in the Department of Linguistics at the University of Arizona, specializing in Native American Linguistics (NAMA). His Master’s research, developed through community experience and archival research, examines descriptive and theoretical aspects of maqlaqsyals (Klamath-Modoc) grammar in the traditional area of the Upper Klamath Basin. As a student in the ANLI program, he intends to continue his work on maqlaqsyals linguistics, while also beginning to explore sociolinguistic and ideological issues that come to bear on the Klamath Basin. In this vein, he plans to examine the influence of political conflict, historical violence, and assimilationist government policies on language shift in this particular region.

Prior to joining the NAMA program, he completed his Bachelor’s of Arts in American Indian Studies, with a minor in Environmental Science and Terrestrial Resource Management at the University of Washington in Seattle.