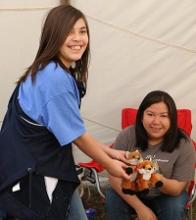 Audra completed her M.A. in linguistics from the University of British Columbia in September 2014 after completing her thesis on Coeur d’Alene grammatical aspects.

While attending UW, Audra was a McNair Scholar, Mary Gates Scholar and a member of First Nations.