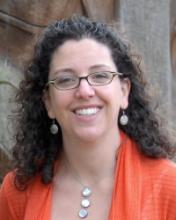 Affiliated faculty, Katie Bunn-Marcuse, received a National Endowment for the Humanities-Mellon Fellowship for Digital Publication, for her project centered in the Kwagiulth First Nation entitled, “A Collaborative Reframing of Franz Boas’s Documentation of the Kwakiutl First Nation in 1930.” View announcement.

Bunn-Marcuse has taught courses at the UW for the Division of Art History and in the Department of American Indian Studies. She became Managing Editor for Bill Holm Center publications in 2008 and added the title of Assistant Director of the Bill Holm Center in 2010; she was promoted to Associate Director in 2015.

Her publications focus on the indigenization of Euro-American imagery, nineteenth-century Northwest Coast jewelry and other body adornment, and the filmic history of the Kwakwaka’wakw. Bunn-Marcuse curated Here & Now: Native Artists Inspired, which showcased new Northwest Coast artworks that were inspired by historical pieces in the Burke Museum’s collection. In her role as curator, she collaborates with Indigenous artists to activate the Museum’s collections in response to cultural revitalization efforts.