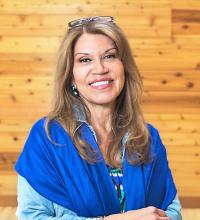 Charlotte Coté, associate professor in the Department of American Indian Studies, will present the Office of Minority Affairs & Diversity’s (OMA&D) 16th annual Samuel E. Kelly Distinguished Faculty Lecture, Thurs., March 12, 2020, at wǝɫǝbʔaltxʷ – Intellectual House. (This event was postponed due to COVID-19 health and safety concerns. When a new date is announced, we will make an announcement on our website and our events calendar).

Held in conjunction with the five-year anniversary of wǝɫǝbʔaltxʷ, the event will feature Cote’s lecture titled “‘Indigenizing’ the University of Washington: Lessons from the wǝɫǝbʔaltxʷ – Intellectual House.” The lecture will be followed by a special panel discussion reflecting on the first five years of the longhouse.

The evening begins with a reception at 5:30 p.m., and the lecture will be held at 6:30 p.m. The event is free, but registration is requested here.

Coté has dedicated her personal and academic life to creating awareness around Indigenous health and wellness issues, taking an active role in working with Indigenous peoples and communities to address health disparities through the revitalization of traditional foodways and ancestral ecological knowledge. She is the author of numerous publications including “Spirits of Our Whaling Ancestors. Revitalizing Makah and Nuu-chah-nulth Traditions,” which raises issues concerning Indigenous self-determination, eco-colonialism and food sovereignty.

Coté is the recipient of numerous awards including the Na’ah Illahee Fund’s Spirit of Indigenous Leadership Award, Women of Color Empowered: Future Builder’s Award, UC Berkeley’s President’s Research Fellowship Award and the Canada-US Fulbright Fellowship. She is the founder and chair of the UW’s “The Living Breath of wǝɫǝbʔaltxʷ Indigenous Foods Symposium,” and serves on the boards of the Seattle-based Native-led nonprofit organizations Potlatch Fund and Na’ah Illahee Fund.

Established in 2005 and named in honor of the first vice president for OMA&D, Samuel E. Kelly, this lecture series acknowledges the work of faculty whose nationally-recognized research focuses on diversity and social justice. Kelly was an educational advocate who opened doors for hundreds of underrepresented students at the UW. Many of the programs and services he established during his six-year tenure still exist today. Kelly passed away on July 6, 2009.