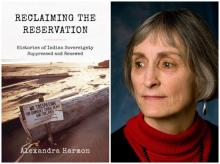 Dr. Alexandra (Sasha) Harmon has taught in the American Indian Studies Program since 1995 and just recently retired from full-time teaching. She received her B.A. from Stanford University in 1966. After graduating from Yale Law School in 1972, she advised and represented Indian tribes in Washington State for over 15 years. In 1988 she entered the graduate history program at the University of Washington in order to research and write about issues that arose for tribes during her years as an attorney. Dr. Harmon received her Ph.D. in History in 1995.

Dr. Harmon's research examines histories of American Indians, with specific attention to their relations with non-Indians, to changing legal cultures, to ethnic, racial, and tribal identities, and to influences of and changes in economic cultures.

In Reclaiming the Reservation, Alexandra Harmon delves into Quinault, Suquamish, and pan-tribal histories to illuminate the roots of Indians’ claim of regulatory power in their reserved homelands. She considers the promises and perils of relying on the US legal system to address the damage caused by colonial dispossession. She also shows how tribes have responded since 1978, seeking and often finding new ways to protect their interests and assert their sovereignty.