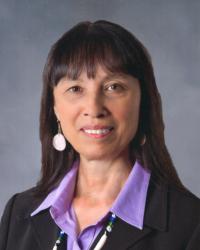 Dr. Luana Ross ( Confederated Salish and Kootenai Tribes, located at Flathead Indian Reservation in Montana) has a Ph.D. in sociology from the University of Oregon, and has been a professor at the University of California at Davis and UC Berkeley. Dr. Ross is an associate professor of Women Studies at UW, has been in AIS as an Adjunct Professor since 1999, and is the co-director of Native Voices Graduate Program. She retired in 2019.

Since her tenure with Native Voices, Dr. Ross has produced several award winning films including A Century of Genocide in the Americas: The Residential School Experience, White Shamans and Plastic Medicine, and The Place of the Falling Waters.

Dr. Ross conducted extensive research on the experiences of women in prison, which resulted in many publications including a book, Inventing the Savage. This book was awarded the “Best Book of 1998” by the American Political Science Association. She was also awarded a Newberry Library Fellowship and a Ford Foundation Fellowship. She has published numerous articles including, “Race, Gender, and Social Control: Voices of Imprisoned Native American and White Women” in Wicazo Sa Review, and “Native Women, Mean-Spirited Drugs, and Punishing Policies” in Social Justice. She has also contributed chapters to important Native Studies and sociology texts, including Reading Native American Women, Native American Voices: A Reader, and States of Confinement: Policing, Detention, and Prisons.